One of the vital ingredients of the 2014 FIFA World Cup™ has today been confirmed, with the announcement by FIFA and Sony Music of the artists behind the event’s official song. One of Brazil’s hottest musical talents, Claudia Leitte, will team up with global superstars Pitbull and Jennifer Lopez on the track entitled “We Are One (Ole Ola)”.

Following the success of Shakira’s “Waka Waka (This Time for Africa)” at the 2010 FIFA World Cup South Africa™, the new single, written and co-produced by Pitbull, is set to bring the passion of Brazil to the world when it is officially released by Sony Music later this year. Capturing the colourful atmosphere of the 2014 host nation, the song will ignite the excitement felt by football fans around the world in the lead-up to the 2014 FIFA World Cup™. 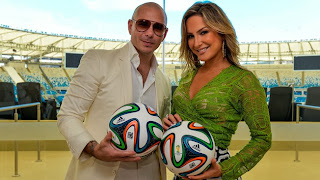 Speaking at the Maracanã on Thursday, FIFA Secretary General Jérôme Valcke said: “FIFA and Sony Music are extremely excited to share the exciting talent of Claudia Leitte with the world, alongside such internationally celebrated artists as Pitbull and Jennifer Lopez. In my many visits to this country, I’ve heard a lot about the great Brazilian music tradition and it gives me great pleasure to see a Brazilian artist at the heart of this song. I’m sure, like me, millions of football and music fans all over the world will be eagerly awaiting the song’s release.”

“I am very happy and thrilled to represent my country at the FIFA World Cup alongside these two amazing artists who I admire and respect. I love sharing my culture and country to people through music!” said Claudia Leitte. “The FIFA World Cup is one of the biggest events on the planet, and I look forward to dancing samba with Pitbull and Jennifer Lopez in Brazil - we are one!”

“I’m honored to join Jennifer Lopez and Claudia Leitte at the FIFA World Cup to bring the world together,” said Pitbull. “I truly believe that this great game and the power of music will help unify us, because we are best when we are one.”

FIFA and Sony Music have enjoyed a successful partnership in the World Cup’s official music programme ever since 1994. The tradition of an official song dates back to the 1966 FIFA World Cup™ in England with a song for the first Official Mascot, the lion “World Cup Willie”. Ever since, the official music programme and the Official Mascot have become an increasingly significant component of the event, providing an excellent opportunity for people other than football fans to identify with the world’s biggest single-sport event.

Official songs at recent FIFA World Cup™ competitions have included “Un’estate italiana” by Edoardo Bennato and Gianna Nannini in 1990, “Gloryland” by Daryl Hall with Sounds of Blackness in 1994, and “La Copa de la Vida” by Ricky Martin in 1998. In 2002, the official song was “Boom” by Anastacia, and there was also an official anthem by Vangelis featuring typical Korean and Japanese sounds. In 2006, “The Time of Our Lives” by the Il Divo quartet was a resounding success, followed in 2010 by “Waka Waka (This Time for Africa)” written by Shakira who performed alongside South African band Freshlyground.