The Caterham left the garage at 15:10 on the first day of testing and features another different take on the new nose regulations. New driver Marcus Ericsson was at the wheel. 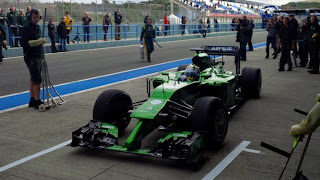 But the new nose design was criticised by Adrian Newey. "If you hit the back of a car square-on, you go underneath and you end up with a rear-crash structure in your face, a much worse scenario," he said.

The CT05 features a the team's standard green livery along with the unique nose and front wing. This year Ericsson is joined by Formula One returnee Kamui Kobayashi, who missed the 2013 season after losing his Sauber drive.