1) Away Doubts Extinguished
It's a compliment to Arsenal that in beating Spurs on Wednesday night, Manchester City went top of the Premier League for the first time since mid-August. Having got there, it would be brave (or potentially stupid) to suggest that they will finish in any other position. 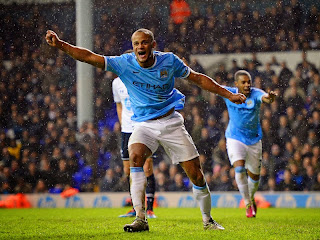 The evident reservation about City before Wednesday's match was the nagging doubt regarding their form away from the Etihad, where they have been disgustingly ruthless. Six victories in seven away games was obviously more than acceptable, but Leicester, Fulham, Swansea, West Ham and Blackburn were five of those opponents.

Those doubts were effectively extinguished during an opening half-hour in which the visitors were phenomenally dominant. Twelve shots in 30 minutes included a 14th goal in 13 games for Sergio Aguero, and both the Argentinean and his strike partner Edin Dzeko both had chances to extend City's lead. The penalty/red card double whammy effectively ended the game as a contest, but this was still a City side in almost complete control for 80 minutes.

The statistics are verging on obscene. 115 goals in all competitions before the end of January; this is a side scoring in record-breaking fashion. There have been eight occasions this season on which a team has scored more than five goals or more in a Premier League match - City are responsible for 50% of those.

You don't have to like City, but it's pretty difficult not to sit back and admire them. Sorry Spurs fans.

The decision from Andre Marriner five minutes into the second half will be much-debated, but was correct. Danny Rose's naivety to fly into a challenge from behind deserved nothing better, and slow-motion replays clearly showed him catching Dzeko's heel before making connection with the ball. Touching the ball does not mean that a foul has not been committed.
more news to.