The case has been registered at the Gulberg police station in whose jurisdiction the alleged incident happened on Saturday.

"He violated a traffic signal and when he was stopped by the traffic warden he misbehaved with him, got abusive and also tore his shirt," senior police official Tariq Aziz told reporters on Saturday.

Aziz said physically assaulting and tearing the shirt of a police officer was a serious violation. 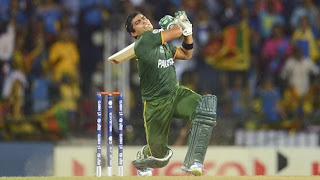 "He is presently detained at the police station for questioning," he added.

However, Umar, 23, denied the charges and told reporters that the traffic warden had slapped him and abused him over a minor issue.

"His behaviour was inappropriate to say the least. I came to the police station to register a complaint and instead they have detained me," he added.

Umar, who has appeared in 16 Tests, 89 one day internationals and 52 Twenty 20 matches, is regarded as one of the most exciting young talents in Pakistan cricket.

The younger brother of Test players Kamran and Adnan Akmal, Umar claimed the incident was captured on CCTV cameras at the traffic signal and the footage will make it clear who was the aggrieved and guilty parties.