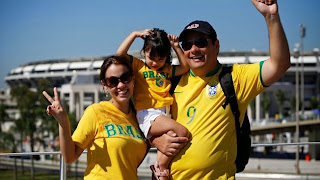 Football fans have until 12.00 (CET) on 30 January 2014 to apply for tickets on www.FIFA.com/tickets. During this sales period, all fans have an equal chance to be successful, regardless of the date of the ticket request, as all requests will be amalgamated at the end of the phase and processed together. In the event that the number of requests received per product and category exceeds the number of tickets available, a lottery will be held to determine the successful applicants.

Furthermore, 29,913 requests have been received to date for the participating member association (PMA) ticket category, sales of which also started on Sunday, 8 December 2013 but will remain open until 7 February 2014. All PMA ticket requests are treated equally and these tickets are also sold by random selection, which means that fans are not under any time pressure to submit their requests. The PMA tickets are sold via a special link which can be accessed either via FIFA.com/tickets or from the respective team page in the FIFA World Cup™ section on FIFA.com. It is important to note that each PMA can decide to only allow their fan club members access to these specific supporter tickets, as is the case for England for instance.

FIFA has reserved 16% of the tickets for every match for fans from both teams (8% per team per match), including tickets for Brazilian and Croatian fans for the opening match at Arena Corinthians in São Paulo on 12 June 2014. To be eligible for PMA tickets, applicants must either reside in or be a national of the country whose match they wish to attend. In this quota, only tickets from categories 1-3 are available.