Athlete Feature
Posted by Uong Jowo Tuesday, January 28, 2014
1
The 19-year-old rose from 31st to a career-high 19th thanks to her surprise run to the semi-finals of the Australian Open last week.

"Early at the beginning of the year I said as a ranking goal I wanted to be in the top 20 so I have accomplished that," Bouchard told reporters in Singapore.

"So now I need to change my goals, of course its all about consistency as well and staying in the top 20 and getting to a certain level and staying there." 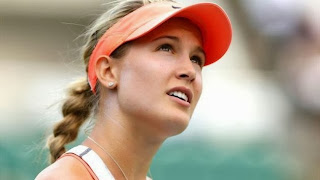 Having dispatched former world number one Ana Ivanovic with some powerful hitting in the quarter-finals, the former junior Wimbledon champion struggled to a straight sets defeat to eventual champion Li Na in the last four.

Undeterred, the tall blonde haired right hander said the experience of reaching a first grand slam semi had been invaluable.

"Yeah I had a good experience at the Australian Open this year, I played really well and am happy with how it went but of course I'm never happy when I lose a match so disappointed with that but really happy to get the experience," she said.

"I'd never played a tournament longer than a week before so still being in the same tournament 10 days after it started was new to me and really interesting so I hope I can experience that many more times.

"It gave me more self confidence and showed me that I belong at the top level and that I can play against great players and play well and keep my composure on big courts as well. I played three matches on Rod Laver and it was such a good experience."

Bouchard was in the southeast Asian citystate to help the WTA promote their end of season championships, which will take place in Singapore for the first time in October.

Her strong run in Melbourne left her joint third in the Road to Singapore rankings and she revealed she was eyeing a spot in the top eight which would earn her a berth at the finals in Singapore.

"I think this year is going to be my second full year on the Tour so I'm looking forward to doing everything again," said the Montreal-born Bouchard, who is yet to win a WTA event.

"I know all the experiences, I've been to all the cities and the big tournaments so I'm just looking forward to being on tour and playing the sport I love and improving as a tennis player.

"Of course it will be really tough to make them, the top eight in the world is a great achievement so its one of my goals and I'm just really looking forward to working hard and trying to get there."