Football
Posted by Uong Jowo Wednesday, January 29, 2014
0
Manchester City used another rampant scoring display to replace Arsenal at the top of the Premier League with a 5-1 win at Tottenham on Wednesday, while Chelsea lost ground in the title race with a 0-0 draw against West Ham.

After beating Spurs 6-0 at the Etihad Stadium, Manuel Pellegrini's side was unstoppable at White Hart Lane as well and extended its unbeaten run to 20 matches, in which time they have scored 69 goals. 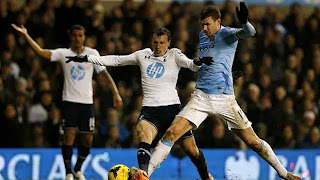 City received a decisive boost when Danny Rose was sent off in the 50th minute for tripping Edin Dzeko. Yaya Toure converted the penalty before Dzeko made it 3-0. Etienne Capoue's pulled one back but Stevan Jovetic and Vincent Kompany added gloss to victory.

City now leads Arsenal by one point, with Chelsea lagging three points behind. Elsewhere, Sunderland beat Stoke 1-0 and Aston Villa defeated West Bromwich Albion 4-3 in a derby that saw six goals scored in the first half.

Since the thrashing at City and the subsequent sacking of coach Andre Villas-Boas, Tim Sherwood had overseen an upturn in fortunes at White Hart Lane, with Spurs undefeated under their new manager and having won their last four Premier League matches.

They had the better start as the in-form Sergio Aguero went close in the fourth minute with a shot from an angle that hit the post.

Aguero looked unstoppable during the first half and put his team in front in the 15th minute, scoring for the eighth successive game when he slipped the ball past goalkeeper Hugo Lloris from David Silva's assist.

The Argentina striker's header then forced Lloris to a beautiful one-handed save. Unfortunately for City, Aguero picked up an apparent hamstring injury while sprinting for the ball and was replaced by Stevan Jovetic.. more news