Athlete
Posted by Uong Jowo Friday, January 31, 2014
0
The Norwegian is already the most successful biathlete in Olympic history with 11 medals and he will be looking to add to his six golds in Sochi in what will be his sixth Olympics. 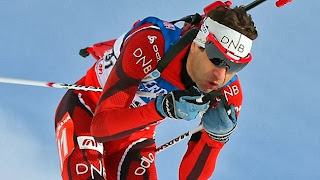 Bjorndalen, who turned 40 this month, has not enjoyed his best season and has not won a World Championships individual medal since Vancouver where he won silver in the individual and gold in the team relay.

"I really want to do well in the sprint. This used to be one of my best disciplines," said Bjorndalen, who has won 50 Olympic and World Championship medals.

"Not everything has gone right for me over the last few years. Last year I prepared well for the World Championships and was close to getting the result I wanted.

"Therefore, I am going to put in a lot of effort into doing well in the sprint (in Sochi)."

His Norwegian team mate Emil Hegle Svendsen, who won four gold medals at the 2013 World Championships in Nove Mesto in the Czech Republic, and Frenchman Martin Fourcade are the two big favourites going into the Olympics.

Fourcade has been in excellent form and has been ranked the best overall biathlete for the last two seasons in the World Cup.

The host nation's hopes will rest on Evgeni Ustyugov, who won gold in Vancouver in the Mass Start and Anton Shipulin, who claimed two medals at the last World Championships.

However, there best hope of bringing home a medal could be in the relay, where the country is ranked number one in the world rankings.

Following Magdelena Neuner's shock retirement at the age of 24, the women's field is wide open.

The German was the most successful female athlete at the World Championships with 17 medals, but suffering from a lack of motivation she decided to quit the sport in March 2012.

Tora Berger looks set to take over from where Neuner left off, the Norwegian having won four gold medals at the last World Championships in Nove Mesto.

She is currently third in the World Cup rankings and will be determined to put in a good performance in Sochi, with the 32-year-old intending to retire after the games.

Daria Domracheva and the young Czech biathlete Gabriela Soukalova are more than capable of upsetting Berger.

Domracheva, from Belarus, is the reigning mass start world champion and has won two World Cup events this season.

However, it is the 24-year-old Czech who has been setting the pace on the World Cup this season with three wins putting her top of the rankings.

Germany's 36-year-old Andrea Henkel is in the twilight of her career, having first competed at the Salt Lake City Games, but is still a force to be reckoned with although it would be a surprise if she adds to her four career Olympic medals in Sochi.

Russia won just one medal in the women's biathlon event at the Vancouver Olympics, in the relay, and they have a relatively young squad, with Olga Vilukhina and Irina Starykh 25 and 26 respectively.

They will be led by 35-year-old two-time Olympic gold medalist Olga Zaitseva, who is also hoping to enjoy a golden swansong in Sochi before retiring.

The squad are coached by German Wolfgang Pichler and Zaitseva agrees with his belief that Russia's women will win at least one individual gold.

"He always thinks we will be the best, but of course that is not always the case," she said. "We are doing everything to try and win. We are not sitting around or not getting a suntan.

"We are doing everything in our power to try and win."