Football
Posted by Uong Jowo Wednesday, November 27, 2013
0
The first batch of close to 1.1 million tickets for the 2014 FIFA World CupTM have been allocated. Following the success of the first “Random Draw” period, with nearly 890,000 tickets allocated, the remaining tickets available in the First Come First Served period were sold out only seven hours after the window opened. Tickets were made available for purchase by fans around the world via FIFA.com. About 62% went to Brazilians and 38% to international buyers. The top five nations were Brazil followed by the USA, Australia, England and Argentina. 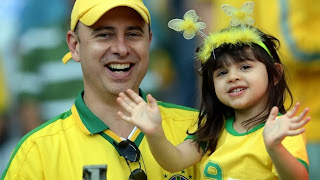 In general, about 55% of the successful ticket holders requested for their tickets to be delivered by courier service whereas in Brazil this figure was 45%. The remaining ticket holders preferred the option of personally picking them up at one of the collection points in the twelve host cities.

“As expected, the level of interest was impressive, in fact four times greater than during the first sales window. The high number of applicants lead to some waiting time but overall the system worked well. It was great to see that both internationals and Brazilians were aiming to grab the remaining tickets from the first batch of tickets made available. This clearly shows the huge appeal of attending the FIFA World Cup live in Brazil,” explained FIFA’s Marketing Director Thierry Weil, who is responsible for ticketing. Due to the huge demand with 3.6 million page views, ticket applicants had to wait an average of 45 minutes in the waiting room until they were processed in the order of access of the site to ensure fair access to the ticketing tool. However, the system operated without any problems during the sales process.

Fans looking to attend next year’s flagship football event will have further chances. Further tickets for all 64 matches will be made available after the Final Draw as soon as the second sales phase kicks off on 8 December 2013, once the final match schedule for the group stage matches is known. This will also include the 8% which are reserved exclusively for the fans of each one of the participating teams for each of their matches – in total 16 % of the stadium capacity is reserved per match for the fans of the two teams playing. To keep abreast of developments, simply log on to FIFA.com/tickets.